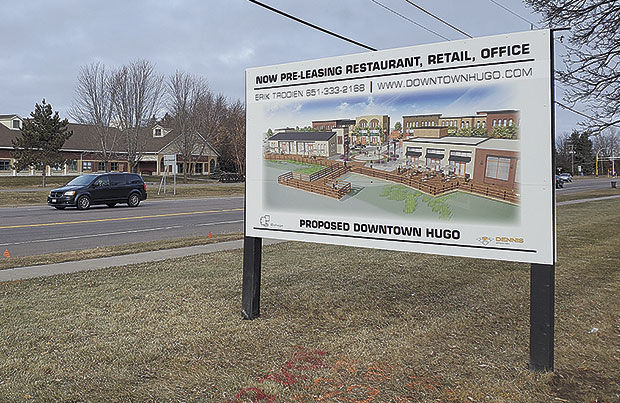 This sign was installed last week on the city-owned property across Highway 61 from Hugo City Hall. 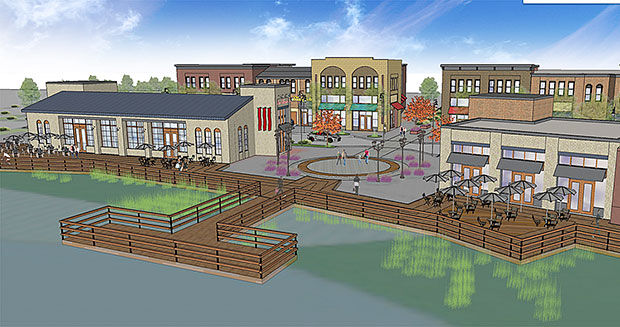 Denny Trooien, of Dennis Properties LLC, would like to develop the property along the lake with uses such as a restaurant, retail and office. The council recently approved a purchase agreement for $1, subject to review by the city attorney and financial adviser.

This sign was installed last week on the city-owned property across Highway 61 from Hugo City Hall.

Denny Trooien, of Dennis Properties LLC, would like to develop the property along the lake with uses such as a restaurant, retail and office. The council recently approved a purchase agreement for $1, subject to review by the city attorney and financial adviser.

HUGO — The Cattle House Grill proposal for Egg Lake’s western shore is no more, but a new concept has been proposed.

The City Council has approved a purchase agreement, subject to review by the city attorney and financial adviser, for the city-owned property across Highway 61 from City Hall. Denny Trooien, of Dennis Properties LLC, would like to develop the property along the lake with uses such as a restaurant, retail and office.

The Economic Development Authority (EDA) has agreed that the concept generally meets the development criteria the city has for the property and directed city staff to negotiate a purchase agreement for $1 with Mr. Trooien, which the council approved Dec. 7.

The Cattle House Grill, which was the vision of Tony Harmening, was previously proposed as a concept for the site. Harmening first presented a concept to the EDA in August 2019 and again with a revised concept in October 2019. The council approved the purchase agreement in November 2019 and the planned unit development and site plan in May 2020. At that time, Harmening said construction would not begin until the pandemic was over. Community Development Director Rachel Juba explained that the purchase agreement was terminated by both parties in July because of a lack of financing for the project.

Trooien presented his concept to the EDA back in August 2019 (the same night as Harmening) and more recently in September 2020. The current plan includes 89,000 square feet of building space with 200 parking stalls. The development would likely be built in five phases, with the first phase including at least 4,500 square feet of restaurant space. Juba said it’s important to note the total building square footage may need to be reduced to accommodate the required parking.

Phase I would also include the construction of “Main Street,” which would be a public street with sidewalks and include decorative lighting and opportunities for banners. Forty parking stalls on the south side of the development site and south side of Main Street are also proposed for the first phase.

Mayor Tom Weidt said he supported the project. “I’m excited to see what you can accomplish over there, and we are looking forward to it.”

Trooien said, “We are very excited about it. We are going to do our darndest to get a road grader out there next summer.”

Trooien still needs to officially file a land use application with the city and go through the approval process, which would include the Planning Commission and, ultimately, the City Council.

“Until (he) actually goes through the land use approval process, it is hard to know if what he has on the plan is actually real and something that the city would approve, but generally what we are seeing in his concept plan is looking pretty good,” Juba said.

Juba added that the entire amount of land, about 4.5 acres, will not be sold for the first phase. The amount of land sold will be determined if and after a building permit is issued. If all goes as planned, construction could begin this summer.