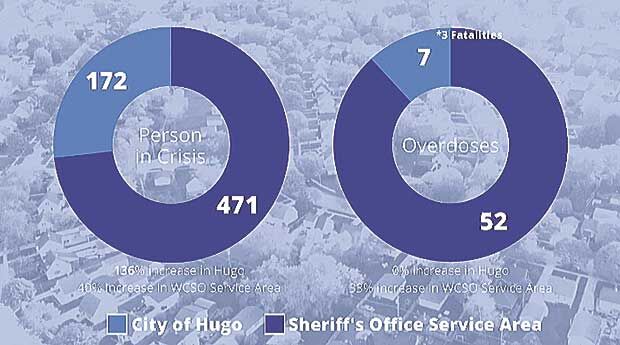 Mental health calls more than doubled (increased by 136%) in Hugo and increased by 40% in the Washington County service area for 2021 when compared to 2020. The number of overdoses in Hugo remained flat compared to 2020, but the county documented a 33% increase in overdoses. 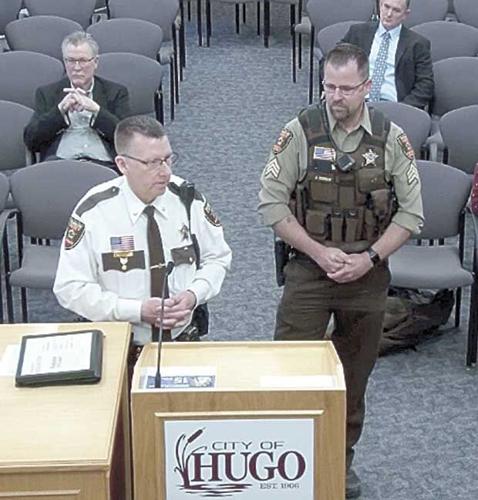 At a City Council meeting, Washington County Sheriff Dan Starry recognizes Sgt. Joe Zerwas for 15 years of service with the Sheriff’s Office, most of them in Hugo.

Mental health calls more than doubled (increased by 136%) in Hugo and increased by 40% in the Washington County service area for 2021 when compared to 2020. The number of overdoses in Hugo remained flat compared to 2020, but the county documented a 33% increase in overdoses.

At a City Council meeting, Washington County Sheriff Dan Starry recognizes Sgt. Joe Zerwas for 15 years of service with the Sheriff’s Office, most of them in Hugo.

HUGO — Perhaps the most shocking statistic revealed by Sheriff Dan Starry’s is that mental health calls more than doubled (increased by 136%) in Hugo and increased by 40% in the Washington County service area.

Each year Sheriff Starry, along with several Hugo deputies, visits the Hugo City Council to recap what the Sheriff’s Office saw the previous year in terms of calls, trends, priorities and more.

The city of Hugo contracts with the Washington County Sheriff’s Office (WCSO) to provide police services. Currently, there are six full-time deputies, one full-time detective and one full-time sergeant from WCSO assigned to Hugo. The city’s $1.24 million contract breaks down to a cost per capita of approximately $80.

Starry said one of WCSO’s main initiatives for 2021 was officer recruitment and retention. Going into 2022, things are looking up.

“Over the past few years, law enforcement has really gotten a bad rap and with that, enrollment in schools and colleges has really plummeted. Those that could retire have retired. A lot of people just wanted to get out of the career in general,” Starry explained.

The WCSO saw that across the board in all divisions, but the hardest hit was in dispatch. Starry said that dispatch experienced a 44% turnover last year. Thanks to recruitment, negotiation of new contracts and implementation of new programming, Starry explained that the dispatch department is pretty much back to full strength.

Starry then provided some statistics for 2021. Here are the highlights:

• The WCSO responded to 172 person-in-crisis calls in the city of Hugo and 471 countywide, which represents a 136% increase in Hugo from 2020 and a 40% increase in the county. “We have seen this across the nation, this isn’t just Hugo,” Starry said.

• The WCSO receives calls 24/7, but Starry said the majority of calls come in between 3 and 6 p.m. when residents are coming home from work, schools are letting out, etc. Between 8 a.m. and 9 p.m., calls average about 400 calls an hour countywide.

• There were 29 thefts from motor vehicles in the city of Hugo and 188 in Washington County. That number remained flat from 2020 for Hugo; countywide, the number actually decreased by 22%.

• There were 20 residential burglaries in Hugo, one more burglary than reported in 2020.

With the recent rash of car break-ins/thefts at local day care facilities, Mayor Tom Weidt took the opportunity to remind residents to call 911 rather than turning to social media.

“If you are out there in the community and you see something going on that is not right, call 911 and let them know. Don’t go on social media and post about it, don’t speculate what happened 12 hours ago; get on the phone and let them know what is going on so we can do something about it,” Weidt said.

Starry said Weidt was spot on, and wanted to let residents know that it is okay to call 911, even if it is not an emergency, rather than the 10-digit non-emergency number.

“I know for people my age and older, we have always been told, ‘Don’t call 911 unless it is an emergency.’ We want you to call 911,” Starry explained. “It is the same dispatch crew at the dispatch office answering your 911 call that is going to be answering your non-emergency call … That first phone call is so important for us to be there right away.”

Managing Editor Shannon Granholm can be reached at 651-407-1227 or citizennews@presspubs.com.