One of the features that is proposed in the master plan for Lions Park is a fire pit. Here is an example of what that might look like. Council Member Phil Klein said he would like to see multiple fire pits throughout the park. 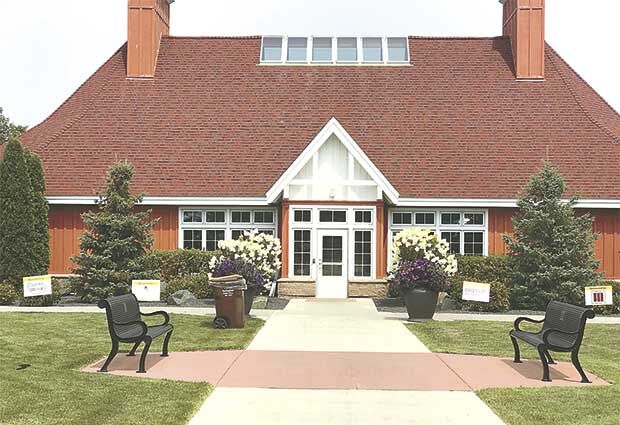 The master plan calls for a pavilion/shelter at Lions Park. The shelter could be similar to the building at the Hanifl Fields Athletic Complex.

One of the features that is proposed in the master plan for Lions Park is a fire pit. Here is an example of what that might look like. Council Member Phil Klein said he would like to see multiple fire pits throughout the park.

The master plan calls for a pavilion/shelter at Lions Park. The shelter could be similar to the building at the Hanifl Fields Athletic Complex.

HUGO — Whether Lions Park should be a regional destination park and include a water feature were both discussed at length during the joint Parks, Recreation and Open Space Commission and City Council workshop last month.

The purpose of the meeting June 29 was to review the ongoing feasibility study, continuing to finalize the master plan and make sure both the council and parks commission are on the same page.

Landscape architect Candace Amberg, of WSB, has been updating the master plan that was designed for the park back in 2015 to make sure it aligns with the current commission’s vision and more accurately reflects what is going on around Lions Park. The project estimate, including contingency and design fees, is $5 to $9 million. Some of the necessary road improvements and trail improvements would be included with the future Hugo Gardens development.

Some of the big variables will include the park shelter size, playground, water feature and parking arrangement near City Hall.

The question of whether the park would still be a great location for the annual Good Neighbor Days (GND) celebration came up.

“If there is a priority of something that makes the park usable for 51 weeks of the year versus the one week of the year for GND, I think we should keep that balance in mind,” said commission Chair Dave Strub. He added that long term, the better fit would be to move GND to Irish Avenue Park.

Council Member Chuck Haas said he agreed. “It would be a shame to construct this park for just one week of activities when it going to be used other 51 weeks for other things, and especially when you consider all of the money that is going to be put into it.”

Mayor Tom Weidt said he also agreed. “Lions Park was not designed solely for the purpose of having GND. It kind of has outgrown the spot now. After we get this done, it probably is a better place to have it out at Irish Avenue Park.”

Weidt said he would like to see the Lions involved in the discussions about Lions Park going forward.

Council and commissioners also shared their opinions about the possibility of having a splash pad or some type of water feature in the park.

The annual cost of operation would be about $10,000 for the recirculating option and about $35,000 per year for the flow-through system.

Council Member Phil Klein said he would not be comfortable with either option. “That is a very high water usage situation, and here in Hugo we have established ourselves as conservative with water; I don’t see that as conserving water at all. I would prefer to see us put more fire pits in as opposed to a splash pad or doing an extraordinary playground.”

Haas agreed. “I don’t think it is consistent with our philosophies of water use ... I think there is a lot of things to do at the park and I think it would be enjoyed as wonderful park even without that.”

Council Member Becky Petryk said she would prefer to see money spent on something that could be used year-round, versus only a couple months in the summer.

Commissioner Matt Rauschendorfer said he thought the splash pad would be a big draw for both Hugo residents and non-Hugo residents. “I think that having a water feature like this will bring in people from afar to Hugo, whereas I don’t think the playground itself will. That was the theory behind putting a splash pad in the park,” he said. “Trying to make it a destination park rather than just a neighborhood, city of Hugo park.”

Commissioner Ranell Tennyson said, “My family travels outside of Hugo to go to splash pads in Eagan and Woodbury just to go to a park where there are water features. I probably wouldn’t drive super far necessarily for playgrounds because we have got wonderful playgrounds currently.”

Commissioner Cathy Moore-Arcand said it was her impression that they were talking about attracting people to move to Hugo versus having people just visit. She added that back when the parks commission was going through the original master plan process, the number one requested feature from residents was a water feature.

Weidt said he has never thought of the park being a regional destination and did not think it would be responsible to have a water feature. “I have never thought of it as a regional attraction, that we were trying to use our tax dollars to attract people from other towns to come here and use it.

“I don’t think that is what I would want done with my tax dollars, to attract people from across the metro to come and use the park in Hugo,” he said. “I was looking at this park as a gem of the system, putting a beautiful park together that is really the top park in our system and have it look like it represents what Hugo has become.”

Weidt added, “The idea of wasting water is against what we have been up to for the last eight years.”

Tennyson said if it wasn’t the water feature, there would need to be something magical. “Hugo has done such a great job putting parks in neighborhoods, nobody has a reason to go anywhere else ... We felt like this needed to have a draw piece in it to bring the community of Hugo to it, not necessarily the whole metro, but at the very least our citizens,” she said. “We need to have something that people are willing to drive to, otherwise it will just be used by the residents that live around City Hall.”

Council members Mike Miron and Petryk joined Mayor Weidt in saying they thought the pavilion would be a popular, heavily used amenity. The cost estimate ranges from $2.2 to $3.5 million just for that feature, depending on the size and what is included.

City Administrator Bryan Bear explained that currently the city has budgeted for a project to cost up to $7.2 million. “The main concern, the more we talk about the pavilion, is that is the big swing in the numbers. That is the thing that is going to blow up the costs more than anything,” he said.

Weidt said everyone is going to have to continue to put a lot of effort into the process and work together to develop a great plan. “It is pretty exciting to plan for something that will be here for the rest of our lives and the lives of our kids and be a big part of Hugo for generations to come ... I think it is going to be very exciting to see it completed and see this as a staple of Hugo parks.”

The parks commission will review the master plan at its July 15 meeting and ultimately send a recommendation to the City Council for consideration at the June 20 meeting. Parks Planner Shayla Denaway said there will likely be a community meeting, and stakeholder groups will be formed to help design amenities like the park shelter and playground. The plan is to finalize the design for construction in 2021.