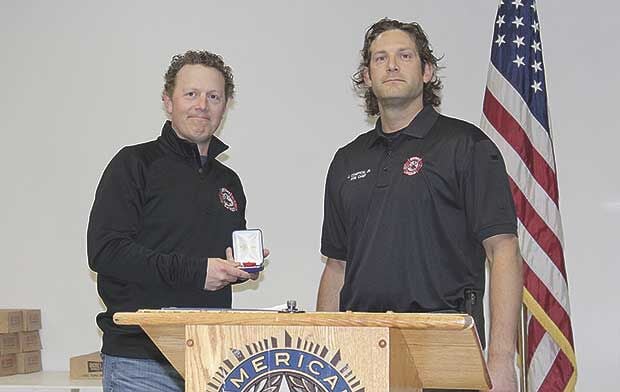 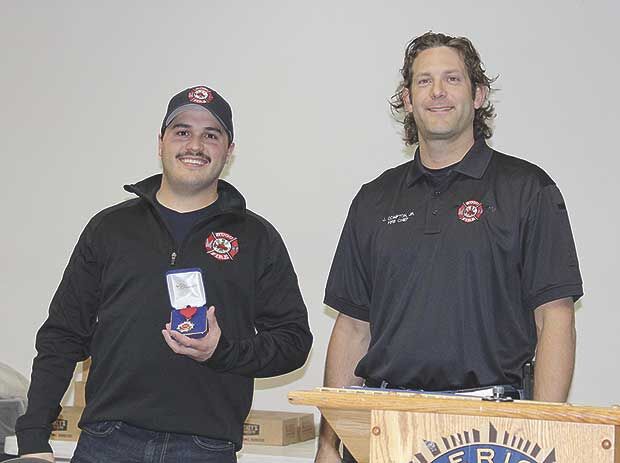 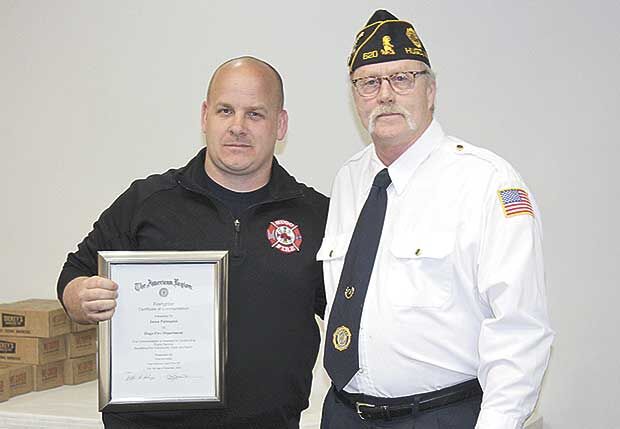 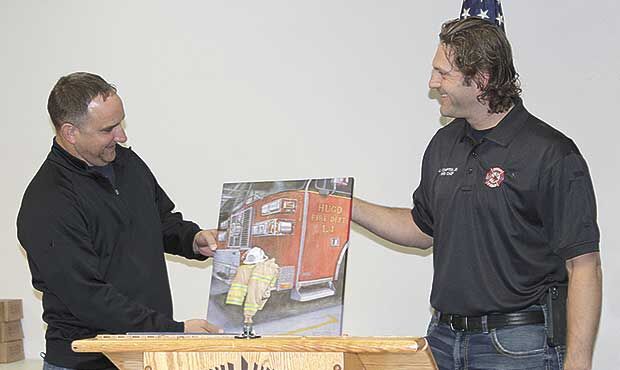 In a non-pandemic year, members of the Hugo Fire Department (HFD) would have already gathered for a meal and presentation with their fellow firefighters, significant others and city officials to celebrate the year’s achievements.

Now that all of the firefighters have been vaccinated, they were still able to gather at American Legion Post 620, enjoy a prepackaged meal from Dickey’s Barbecue Pit and recognize those members who have achieved milestones and other honors in 2020.

Legion Post Commander Greg Burmeister, a retired firefighter himself, presented Jason Palmquist with a Certificate of Commendation for “outstanding public service benefiting the community, state and nation.” Palmquist was awarded the Legion Service Award for his past service in the United States Marine Corps, service on the Hugo Good Neighbors Food Shelf board of directors, and his service to the city of Hugo as a lieutenant on the fire department.

“He had one of the highest percentages for call attendance since we started giving out this award,” said HFD Chief Jim Compton Jr. March 23. “Not only does he respond to the most calls, he does a lot behind the scenes to help make the department function.”

Colin Emans was selected for Officer of the Year. Emans has been selected to serve as the next HFD assistant chief, which the City Council was scheduled to approve Monday (after press deadline).

“In 2020, he had to revamp all scheduled drills and adapt to a new way of training. Colin had to come up with new ways to make sure we covered all the required training while keeping the department in smaller groups,” Compton said. “He ensured all firefighters were receiving the same information so they could function as one team in the event of an emergency. This was a very difficult task, and he did a great job managing it.”

Firefighters voted for Jake Jorgenson to be Firefighter of the Year.

“For only being on the department two years, Jake does a lot behind the scenes, responds to a lot of calls, and has high drill attendance. The firefighters noticed that of him,” Compton explained.

• 5-year service commendations were given to Palmquist and Matt Drew.

• 10-year service commendations were given to Kevin Kriegshauser and Doug Millard.

• 15-year service commendation was given to Gina Duncanson.

• 20-year service commendation was given to retired Chief Kevin Colvard.

• Drill commendations (attending 100% of scheduled drills) were given to Rick Gregoire, Ross Hoernemann and Palmquist.

Roly Guareschi, who tuned into the program via a laptop from poolside in Florida, was recognized for his 13 years of service to the community. He retired from the department in January. While he was the chief engineer, he helped develop HFD’s engineer program. He also served as the president of the Firefighters Relief Association.

“In Roly’s 13 years, he responded to a high number of calls. When we had the ambulance (service), he covered more shifts than anyone else on the department. He also volunteered for a lot of community events,” Compton said.

Colvard was recognized for his 20 years of service to the community. Colvard was promoted to training captain after only serving on the department for two years. For a few years of his service he held three captain-level positions at one time — training captain, safety captain and chief engineer.

“He would take vacation time from work and spend it at the fire station making the department a better place,” Compton said. “His fingerprints are all over the station and the trucks. He helped bring the department to the next level.”

HFD presented Colvard with a plaque, retired chief apparel and a custom painting of Colvard’s gear propped up on the aerial engine.