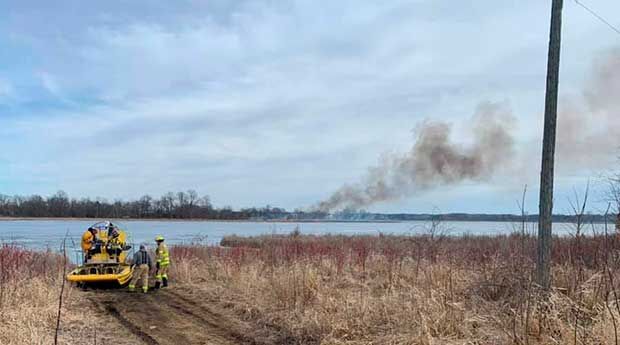 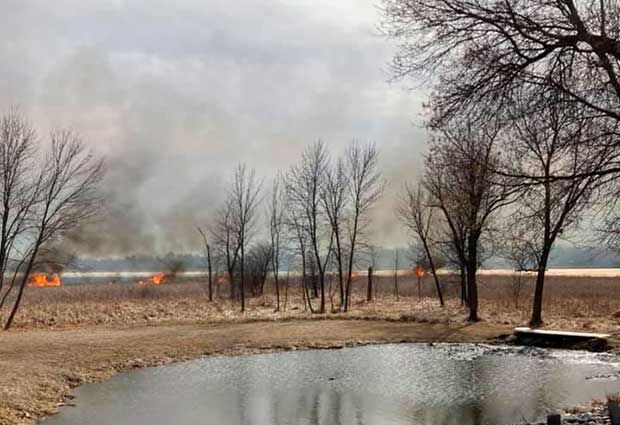 The Hugo Fire Department (HFD), along with assistance from several other agencies, battled a brush fire for several hours on the east side of Egg Lake March 14.

HFD was dispatched to the call around 3:30 p.m. Hugo Fire Chief Jim Compton Jr. explained that fire personnel were on scene working to contain the flames for four hours. Compton said the fire was started from an unattended, illegal burn, which was fueled by the high winds.

“Several acres burned and the fire threatened one home on the lake,” Compton said.

There was no structure damage reported. The Department of Natural Resources (DNR) and the Forest Lake, Lino Lakes and White Bear Lake fire departments also assisted on the call.

“HFD would like to remind residents that we are in high fire danger season with how dry it is outside,” Compton urged. “A campfire is 3 by 3 (feet), and you should have a water source nearby.”

According to the DNR website, “below-average snowfall this winter came on the heels of an abnormally dry fall in 2020. What little snow there is will quickly melt away, revealing very dry grasses – fuel favorable for wildfire ignition and spread.” Three-quarters of Minnesota wildfires occur early in the year, in the months of March, April and May.