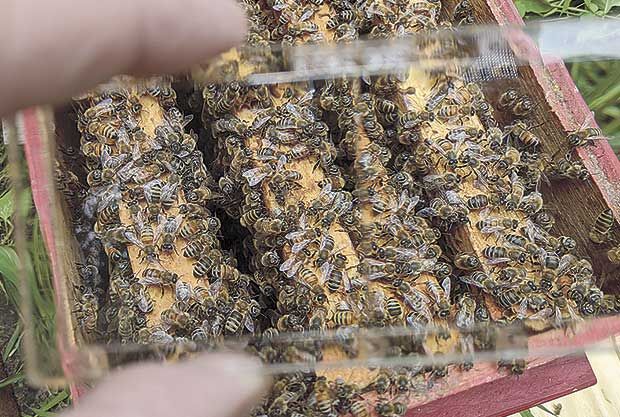 The ICBZ (I See Bees) magnifying lens, designed and created at home by Steve Woolstencroft, gives beekeepers a bee’s-eye view of what’s going on inside the hive. 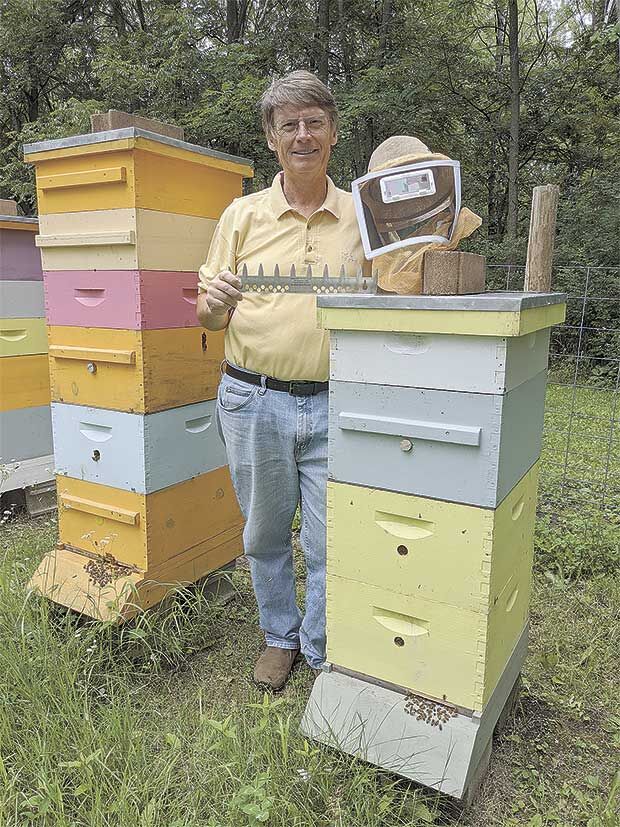 Steve Woolstencroft shows off his home-designed frame spacer and veil with a built-in magnifying lens.

The ICBZ (I See Bees) magnifying lens, designed and created at home by Steve Woolstencroft, gives beekeepers a bee’s-eye view of what’s going on inside the hive.

Steve Woolstencroft shows off his home-designed frame spacer and veil with a built-in magnifying lens.

The lives of honeybees are miniscule and complex, but under Steve Woolstencroft’s magnifying lens, it’s easy to appreciate the elegant design of their mysterious lives.

“Everything’s in focus, no matter what you look at,” Woolstencroft said. “You can see parasites on the bees if they have them, the eggs in there, the stages of the larva and how they’re growing up to the stage just before they cap the cells off. It’s all crystal clear.”

The lens is a product of Woolstencroft’s own design. It’s made of ABS plastic, the same material as LEGO building blocks, and was printed at home on Woolstencroft’s 3D printer. This lens (humorously titled ICBz) is just one of a range of products Woolstencroft has invented and created in his Hugo home workshop as part of his beekeeping business, Miss Bee Haven.

After his retirement from 38 years in manufacturing, Woolstencroft took up beekeeping as a hobby. After taking introductory classes through the University of Minnesota, Woolstencroft had a few ideas for improvements.

“When I started beekeeping, I didn’t like the equipment they had,” he said. “It was too cumbersome; you had to have several different products to do the same thing.”

So he took it upon himself to design something better. Applying the skills learned from his background in tooling design at Harvey Vogel Manufacturing in Woodbury, Woolstencroft devised a new approach.

He saw a way to make a frame spacer that can also serve as a mouse guard during the winter. This custom tool can be placed in the hive to create more space between honeycomb frames, on which the bees construct their combs and nests. The reduced number of frames creates more room for the bees to work, and lightens the weight of the box, which makes it easier for beekeepers to handle.

“This box will weigh over 100 pounds; you think ‘it’s only 100 pounds’ until you go to pick it up,” Woolstencroft said. “It will give the bees a little bit more room. Some people like to run them tight, but it’s so hard to get these out of here without killing bees.”

Wherever Woolstencroft sees a snag in the process, he begins working on a creative solution.

“In the wintertime I get bored and start making things,” he said.

Using home tools such as a 3D printer and recycled cardboard, Woolstencroft produces his own line of beekeeping implements that simplify the work. An adapted pizza cutter even serves as a perforation tool for making his own shipping boxes, and the paint he uses for his hives comes from the recycling center.

The designs he can’t make at home, such as the metal frame spacers and mouse guards, are produced by his former employer, Harvey Vogel Manufacturing. As a result, his designs are some of the only locally produced beekeeping tools available in the region.

Woolstencroft grew up in Birchwood, where he remembers running past a neighbor’s house in fear of the beehives in the yard. These days the thought of getting stung doesn’t bother him so much—in fact, he once got stung on purpose, which he says relieved the pain in his wrist from hours of clicking the mouse on his design computer.

Environmental factors can make beekeeping a costly challenge—something not everyone is prepared to deal with, Woolstencroft said. Bees gather pollen and nectar from flowers from miles around their countryside, which means they take in pesticides and chemicals that can be harmful to the colony. Minnesota winters can also be very hard on hives, not to mention small predators, including mice, that are attracted to the heat and sweet-smelling honey inside a hibernating bee box.

Products such as Healthy Bees, a seaweed-based pollen substitute, have helped his hives stay healthier when the environment outside is most hostile.

In addition to the honey he sells, Woolstencroft also produces beeswax candles with the aid of a solar-powered melter. During the summer, Woolstencroft keeps some hives at Aamodt’s Apple Orchard in Stillwater, where they pollinate the apple trees. Miss Bee Haven is also a member of the Minnesota Grown coalition of local farmers. Woolstencroft does most his business online, but a few of his products can be found in local stores, or by coming straight to his door.

Beekeeping is a constant learning experience, Woolstencroft said. Part of his mission at Miss Bee Haven is to offer support and tools for beekeepers who are still learning. He wishes that beekeeping classes were more extensive and thorough, and he watches beekeeping videos on YouTube every day to keep learning. Helping other hobbyists is one of the most rewarding parts of the business.

“I try to help people out and come out with these products to make people’s lives easier,” he said.

To learn more about Woolstencroft’s beekeeping products, or to check out his selection of honey, visit missbeehavenmn.com or call 651-260-0067.