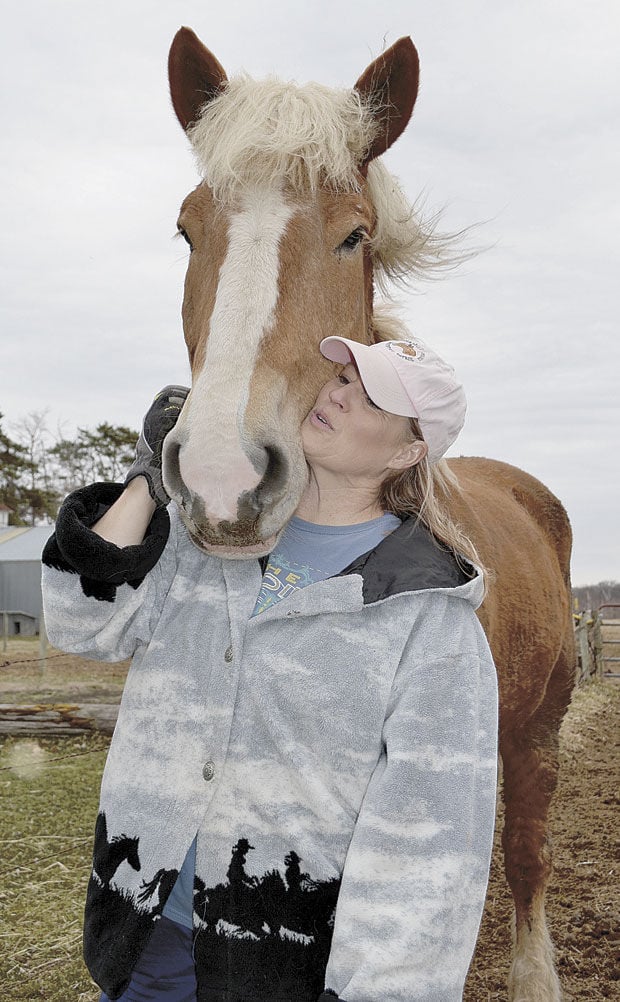 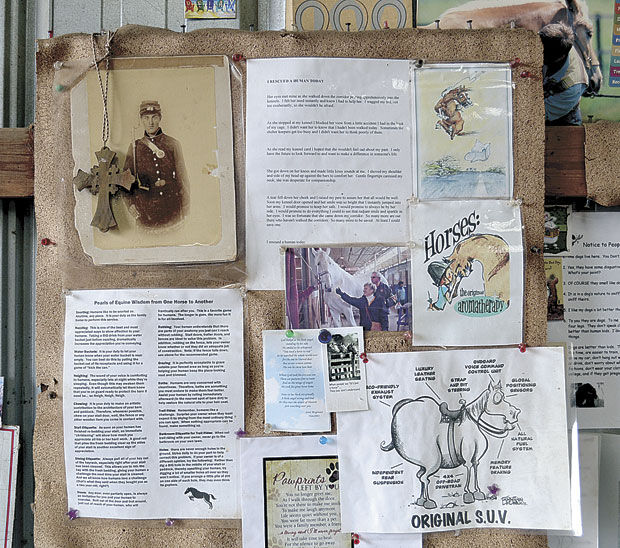 The barn bulletin board holds reminders for Cheri McKenzie of why she runs the shelter. There’s a story called “I rescued a human today,” and cartoons like “Horses: the original aromatherapy.” An old photograph of a Civil War soldier is also pinned to the board. He is Jacob Ginther, McKenzie’s great-great-great grandfather. “He watches over my animals,” she said. — Photo by Debra Neutkens 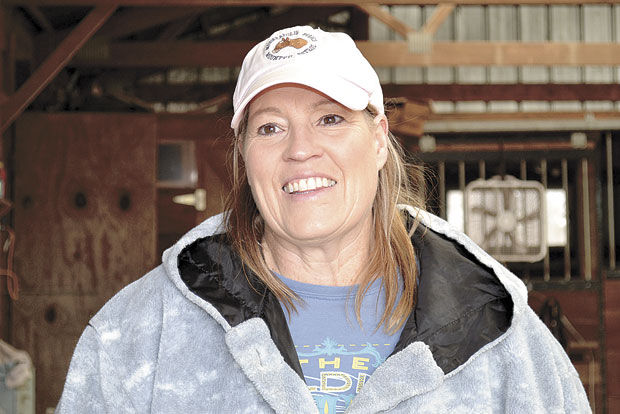 The barn bulletin board holds reminders for Cheri McKenzie of why she runs the shelter. There’s a story called “I rescued a human today,” and cartoons like “Horses: the original aromatherapy.” An old photograph of a Civil War soldier is also pinned to the board. He is Jacob Ginther, McKenzie’s great-great-great grandfather. “He watches over my animals,” she said. — Photo by Debra Neutkens

A May 3 open house at Sundown Horse Farm & Shelter has one goal: to raise money to buy hay.

Owner Cherie McKenzie says quality hay is her main need for the dozen or so rescue horses that live on her farm.

Equines come and go at the shelter as McKenzie finds suitable families willing to adopt or foster a horse. She’s been providing the rescue service since 2006, four years after moving to Hugo.

Her mission is to find permanent homes for the animals, but she will take them back, no questions asked, if a new owner can’t care for them. “I always get first right of refusal,” she said.

It was the “Oh my god” stories that got her started, recalled McKenzie, who has harbored a passion for horses since she was a young girl.

The grandmother of two knows many sad stories, but one in particular is posted on her barn bulletin board. It’s the story of a 28-year-old woman charged with felony animal cruelty in northern Minnesota after she tied two horses to a tree on vacant property and abandoned them. The animals were found dead 18 days later. They had starved to death.

“Unwanted horses are a huge problem in Minnesota,” McKenzie said. “If that woman had just called me, I would have picked them up.”

The Texas native has loved horses all her life. “I can’t wait to get up in the morning and come out here and do this. I love the smell; I love being dirty; I love being outside. It keeps you limber and young,” said McKenzie, who admits only to being in her “late 50s.”

She was leading in a young mare named Emma as the interview started, accompanied by a huge St. Bernard called Lucy, also a rescue. A riding stable was looking for a couple lesson horses and wanted to know their height. Emma was skittish at first but quickly allowed the measuring stick to be placed against her withers. “Horses need to know something you do isn’t going to last forever,” McKenzie said.

The nonprofit shelter only accepts horses that can be rehabilitated and ridden. “The biggest problem with unwanted horses is a lack of training. People’s expectations are to just get on and ride, which may not be realistic,” she noted. “People who want to adopt should expect to spend a couple thousand dollars to get a safe, trained horse.”

Potential owners are “vetted” by McKenzie before taking one of her charges. There can be no barbed wire, no breeding and no sending to slaughter. There is also a $500 adoption fee. She does the ground work, like picking up feet, leading and teaching to trailer load.

The horsewoman is certified in large animal emergency rescue and trained Hugo firefighters in the rescue techniques. Shortly after, a few were called to use the training when a loose horse got stuck in an ice-covered creek near a stable in southern Hugo.

She is also a co-founder of the Minnesota Hay Bank, a group organized under the state Horse Welfare Coalition, that provides hay to people in financial trouble. “Horse owners would call me begging me to take their animal. My first question is, ‘If money weren’t an issue, do you want the horse?’ They’re crying and saying, ‘Yes, I raised this horse but I can’t afford hay and I don’t want them to starve.’ So we find a way for them to keep their horse.”

During the winter of 2013, the coalition fed 700 horses, she said. The hay bank provides a one-month supply per horse up to 10 horses. Hay is stored at Canterbury Downs until the start of racing season. Unused hay is sold. McKenzie said her dream is to have a supplier in every county.

“I can’t stand to see an animal starving when I can do something about it,” she added. “But I can only do what I’ve got with donations. We’re a charity. Every horse I adopt out, that money goes into buying hay and feeding horses.”

She’s also held horses for people who’ve lost their job. “They have to come see their horse and pay me something. They can’t just drop it off for six months and pick it up without some payment.”

Volunteers help at the rescue on weekends and McKenzie is OK there, but she could use a few for the open house. She only wants experienced horse people, though, 18 and older.

Washington County used to be among the top five counties nationally for horses per capita, according to McKenzie, and is first in the state. “My point is there are a lot of backyard horses and places that could foster a horse for me. Even someone who can pasture a horse over the summer would be helpful because I have to buy hay year round.”

People have asked her: Would she do it again? “Probably not,” she replied. “It’s not that I don’t love what I do, but it’s nerve wracking finding them homes. And there’s the challenge of always trying to raise money to feed them. But I’ll do this as long as I can.

“People forget there’s a problem until we hear the next OMG story. I hate to have those heartbreaking stories out there reminding people that we need donations.”

Hay isn’t the only expense, of course. There is also regular deworming, dentistry, vaccinations and farrier care. Her farrier, Fred Jew, trims the rescue horses free of charge, and her veterinary clinic sells vaccine just over cost, but still the expenses add up and impact the number at the shelter.

“It’s a big commitment to own a horse,” McKenzie said. “My goal is to find a horse the right home until they die.”

Proceeds benefit the shelter. For more information, go to www.SundownHorseShelter.org.